Published by afrozenforest on February 18, 2022

Headow Keep was a relatively small castle that sat on Hauthill before the Fall of Rosewood in 1168. It was a relatively ancient structure going back centuries, however, all of that didn’t matter when Rosewood was razed. The entirety of the Keep was pulled down and destroyed, first by siege engines, then by the fires. It stood there for months in peace, overlooking a plundered City, and a people sick and tired of war, a war which had been raging for the past fifty years. Many families had held Headow Keep while it was still standing, chief among them being the Armingtons. After a disastrous turn of events, where a secondborn son killed both his father and brother in order to inherit the Keep, the estate eventually fell to the last surviving Armington, a Lady by the name of Diana. Diana Armington was the last Armington to officially hold the title. She married and moved to a faraway province of the Empire, leaving a vacant keep within Rosewood. The same year, she had met a lady by the name of Johanna, nicknamed “Battleborn” as she led a group of men into battle. They met during the annual tourney and became fast friends. By the time of her marriage and her family’s demise, Diana had no other choice but to appoint Johanna as her viceroy.

Lady Johanna Battleborn ruled over Headow Keep for a number of decades, living off of the Armington gold and off of her previous renown. The years dragged on until Johanna’s hair turned gray and her body became tired. Eventually, she met and rescued a darker-skinned girl from the Eastern Roman Empire. She had been brought over as a slave to her merchant master, but Lady Johanna, seeing the girl’s state, was compelled by her honor to rescue her from her bondage. The girl was named Porphyria.

Porphyria became Lady Johanna’s most trusted friend as she took her back to Headow and taught her both the language and the customs of the Empire. Porphyria picked everything up fast, and never once waned in her loyalty to her Lady. Rumors spread, as rumors do, that Johanna and Porphyria’s relationship went deeper than the usual friendship or feudal obligation one has for their lord or lady. These were dismissed as being false tales, constructed by Johanna’s many enemies. Those who spread these lies often ended up dead or worse. The stories, however, were indeed true. But it’s something only a handful of trusted people would know.

Lady Johanna passed away in 1112 from an unknown and incurable sickness that left her in excruciating pain. Not even the Head Medicus could identify or treat it. Centuries from now, people will have recognized the disease as a form of cancer, one that attacked the body’s very ability to defend itself by targeting the marrow within the bones. Upon her death, Johanna named Porphyria as her successor. Once approved by Lady Diana, Lady Porphyria Headow took the title of Baroness of Headow Keep and began her turbulent rule.

Her ascent to the position of Baroness did not come without issue. Another woman, and a young one at that, being appointed as the viceroy sparked anger among the local nobility and other ambitious individuals who felt like they would be a better fit for the role. Between 1112 and 1120, Lady Porphyria allegedly survived over two dozen attempts on her life; including poisons, daggers, bolts, false ground traps, falling trees, and roadside ambushes. This lifestyle led her into a constant state of paranoia, and she rarely left the safety of her keep, following in the footsteps of her late patroness who also lived a lonely life, surrounded only by her most trusted. The last overt attempt on her life was made by the Church itself. The Inquisition had begun to suspect that Lady Porphyria was not only a lesbian but a heretic, possibly a false convert. This harmed her cause as tensions grew between East and West, and between Rome and Rosewood.

This all came to a close when she publically married Sir Ethan, a General within the Imperial Army who was knighted by the Emperor himself for his devotion to the Empire. The two went on to have a multitude of children. Porphyria was only 26 by this point. She was 33 when the Fifty Years’ War began. By that point, she had become an august figure within Rosewood, an ennobled foreign slave who survived every stone cast her way. She had worn black ever since Johanna passed away, and even named her first daughter after her mistress. She was left a widow after 1133 and the Battle of Buhl. However, in having a husband within the Imperial Army, she became acquainted with them and grew to become a staunch Imperial and a supporter of the Army. Her firstborn, Michael, turned 36 just a day before the Battle of Rosewood, where he died. After 1157, her sons died one by one, her youngest, Constantine, dying in 1166, being 33.

By 1167, she had assembled her large family in Headow Keep and had employed the service of a large number of Imperials to protect it against an attack were the walls to fall. The Headow family numbered 29, 19 of them being Porphyria’s grandchildren.

The Keep remained quiet and cold those last few summer days. Every now and then a stray projectile from the enemy’s siege engines would strike nearby, once even the Keep itself. By August 1168, Lady Porphyria had drawn the bridge to Headow Keep, and it would never be lowered again.

She was always a mysterious woman, and she kept to herself most of the time. But, she did have an immaesurable love for her children, as I suppose most mothers do. Something, however, is different in the way a former slave loves her children, one that came from nothing, and by the good grace of Providence managed to acquire such power in such a short amount of time. She wore that crown of Power with dignity and with honor, even more honor than the late Lady Johanna, I’ve heard. Porphyria was born to rule. The Armington lands saw a tenfold increase in productivity as soon as the estate passed to her. Had the war been delayed, or had there been no war at all, I shudder to think how powerful the Headow family would have become. War, unfortunately, has a way of making stories end tragically.

In the days leading up to the fall, you could see her standing atop the Keep’s veranda. Black dress, grey hair, an old widow, with her hair done up in a neat bun. I saw her once, standing there, looking out towards the eastern wall. In her look there was a crippling saddness, a yearning for a future that never was, which could never be. I’d like to imagine she was torn up about Lady Johanna, after all those years. Perhaps she was also worried about her family who were mostly women and children. Perhaps she was overcome by sorrow upon hearing the final wimper of a dying city, one which had made a Lady of a slave. I like to imagine she said something in Greek, a final whisper to a day which would mark the end of an age.

On the 15th, the walls were breached. I found shelter in the Cathedral. The enemy didn’t seem interested in looting or destroying it. God knows I was grateful. But then I saw it. I had just opened the doors to let in more fleeing citizens when I saw Headow Keep in the distance. It took a direct hit. One of the enemy’s trebuchets struck it, bringing the entire thing down. I closed the doors and prayed for their family. That night I imagined the roof collapsing onto them, I imagined the drawbridge falling and letting through a nasty horde of those Germans. I pictured Porphyria in that same dark dress, her aged dark skin, and her soft white hair. What were her last words I wonder? Was it a prayer for better days, or was it a curse?

I made it my mission to visit the site, and less than a week later I did. The walls were torn down. Stone walls, of brick and mortar and fine stuff, and they simply lay there on the ground. Centuries of stone, turned to dust in a matter of days. I was one of the few who recovered the bodies. We found three women, who were the widows of her late sons, three husbands, three more women; Porphyria’s daughters, and to my horror the corpses of ten and eight children along with Porphyria herself. Some were crushed, some were burned, some must have choked on the smoke, some had poisoned themselves, one flung herself from the veranda, one was stabbed. Porphyria’s body was intact, no apparent wounds. It looked as if she died of sorrow, her heart tearing at the seams. I plead that her spirit wasn’t overcome by the ghost of vengence and spite. To be given such a lavish life after such hardship, only to have it torn from your grasp by the worst war in recent memory… It must have been devastating.

Dated 1180, written in French and stored within the Imperial Library. A written account of the Fall of Rosewood in 1168, focusing on Headow Keep. Words taken from Father Nathan, a priest from Rosewood who was present during the Fall. The account highlights that one of Porphyria’s grandchildren were never found among the ruins of the Keep.

Even after 1220, legends exist about the Headows; how they haunt the streets at night. Specters have been seen around the Mayorly Palace, which was built over the ruins of the Keep. Some have even reported seeing Lady Porphyria late at night, looking out the veranda of the palace searching for something. Most have forgotten the name “Johanna Battleborn”, but most know of the legend of “Lady Porphyria, the Proud Lady of Headow Keep.”

The Holy Orders of the Catholic Church

A list of the most popular Holy Orders in the Catholic Church, and their defining characteristics.

Art, the Artist, and the Common Man

Understanding the evolution and current state of art in the Kingdom of France. 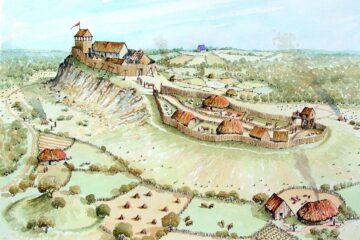 Transcript from a Fisher Mannorial Holding from 1221

Father Samuel, the priest of St. Frodobert's Church, writes an annual transcript of Sir Sebastian Fisher's fiefdom for the year 1221.